Two of my mates have started using feedly. I remember having a look at feedly back when I first heard about reader ending but there was something about it I didn’t like, which I can’t seem to remember what that was.  Anyway so I went back to have a look at feedly. First impresses very nice. It’s a lot more customizable, giving me about 4 different layouts and a bunch of different background colours, it also kept all the things I had starred in google reader and unlike The Old Reader, feedly lodas new pages really quickly.

I think I’m going to use feedly as my main RSS reader once reader dies. However I don’t think anything will ever compared to google reader, while playing around with feedly today I noticed that it didn’t load all my blog post.

It wouldn’t load anything after my drawing post. I’m not really sure why this is, at first I though maybe I needed to use the RSS url and not the normal wordpress url but that didn’t change anything. The same thing was happing for JB, it wouldn’t load beyond that one post. I though maybe it was a wordpress thing, so I looked at another wordpress blog. The same thing happend, it only loaded up to a number of post and said there was nothing beyond, however the amount of blogs it would load changed from blog to blog.

I had a look to see how far The Old Reader would load my blog,

It managed to load older post, but at the same time it didn’t load all my post.

Google reader however managed to load the whole blog all the way back to the very first post I made here.

I guess it’s just more to do with the RSS reader and how much they can store. Once this post goes out I’ll been seeing if there are any changes, will feedly only store 10 post at a time for will it change to 11?

I really am sad at the end of google reader. I’ve been using it for such a long time, how will I internet without it?

So it’s been a few weeks since I talked about The end of google reader and how it made me sad. Since then me and my mates started looking at other RSS clients, I think we have settled on using The Old Reader, which I think is based back on google reader when it was cool? It’s got sharing which is pretty awesome. Back in the day when google reader had sharing me and my mates use to share all kinds of blog post and information and pictures of cats (I’m looking at you Austin) And then google reader took it out and we went back to the old days of IMing URLs to each other and while very often we’d replie with “I’ve seen that already”

Well not anymore! (because the lovely The Old Reader has sharing) 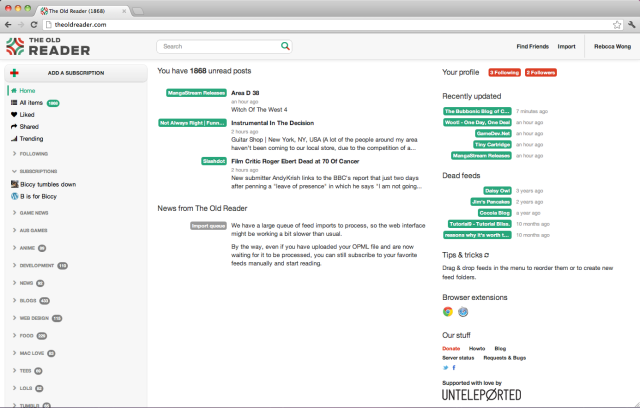 It took a few days to import my subscriptions, but gosh, it was so helpful that it had a function that let me import my  subscriptions from google reader, I would have hated to import all that crap manually… I follow a lot of blogs >.> 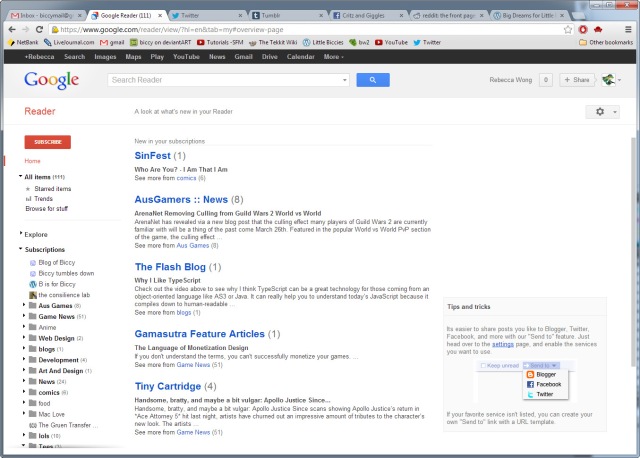 It’s really quite sad that google is planning to shut down their reader. I’ve been using google reader for as long as I can remember, like since 2007. I’m going to be super sad to see it gone (All of me hopes that in the end it will stay) In order to get ready I’ve started looking at replacement RSS readers, which is a lot harder then you’d think, they either cost money or are based on google reader. Also since the news a lot of other people are now also on the hunt for a new RSS reader, silly google, you say that there’s been a declined in use yet all other sites are crashing from the over flow.

Now you might noticed that on my list I have 3 blogs, the very top one is my original blog which I had while doing the games degree, the reason why it’s still on my feed and not removed because (and this is one of the big reasons I loved reader) I could still view my old blog via reader despite the fact that the website that once hosted that blog is long gone. So once google reader is gone I’m worried my old Blog will be gone with it, so over the next few months I think I’ll be uploaded old entries from Blog of Biccy to here. I’ll be using the tag “Blog of biccy” to stop any confusing… I hope… I just want to be able to keep a history of my work/life.