Finally got around to doing the hourly comic for Feb 1. Sadly I forgot to keep track of what I was doing when so this is approximately what happened at what time.

I haven’t really been keeping up with the draw something a week. However I have been keeping myself busy. Last night I finished my resume :D  I have been trying to draw stuff, there just hasn’t been much drawn lately. 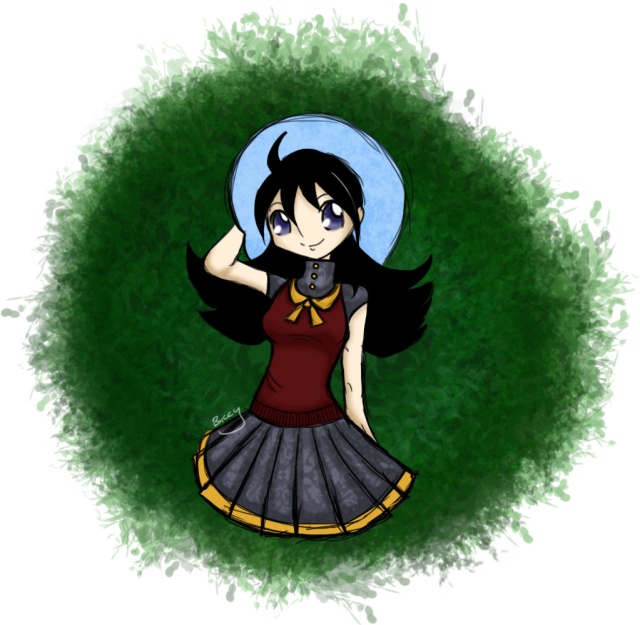 This drawing was actually done way back, I just forgot to upload it.

I love this drawing btw, in animal crossing: new leaf I have Fauna and Roscoe in my town (who I love dearly). It’s gotten to the point where I have told myself that the two are actually going out with each other.

I’m currently on Philip island with JB. We’ve been house sitting for the past week. Part of house sitting includes looking after the animals, a dog named Tess and three nameless chickens.

Not much happens on the island, JB and I both can’t drive and I don’t really like the “outside world” so we tend to spend the days inside. I keep telling myself I’ll go for a walk down to the beach but then I remember it’s a hassle making the trip back.

Today I gave myself a list of things to do and instead I drew the chickens animal crossing new leaf style. 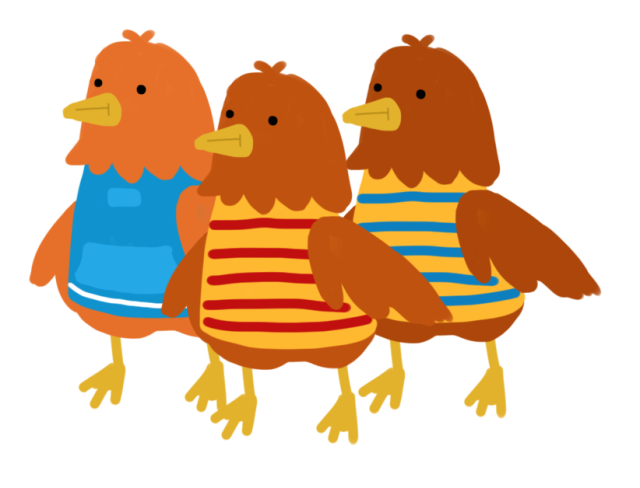 I also drew Tess but the chickens are more funny because for the life of me I can not tell them apart.

The chickens can be jerks at times. The other night we were feeding the dog and the chickens wanted to have what the dog was having. One chicken managed to stick her head into the bowl and escape with a bit of pasta.
The other night I was going to lock them up into their little house however one escaped which lead to the other two running off. When I went to get some bird feed to lure them back into their home one managed to jump onto my back. It was scary.

Today I made some custom designs of some adobe icons as well as the maya icon.

I really like the illustrator icon, it reminds me of a city.

Finished my drawing. I’m not very good at drawing hands… or feet… I think I might reuse the chair and draw other characters sitting in different poses, or maybe try and draw different chairs and do like a whole chair series of drawings. heh.

btw my website is live now. It still needs some fixing but I decided to toss it up or I would just spend forever working on it.

I downloaded a few new custom brushes for photoshop, decided to test them out and ended up drawing a pretty blue sky.

I’m going to try and set myself a few challenges in order to keep myself busy so I don’t turn into a slacker.
Challenge one:
Draw something finished once a week
Challenge two:
First day of the month will be an hourly comic day.

If I manage to do these challenges then I might add a few more. Going to start off with simple goals and work my way up :)

So here’s the line up of everyone last week:

And here are them in their final forms! 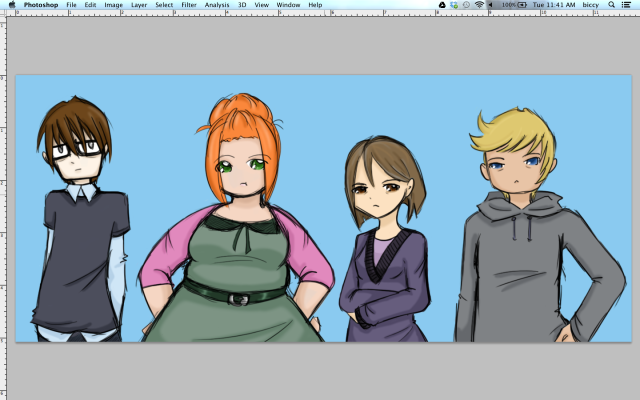 I very much like the new design of Apple, however before I was having problems with Apple and Lady looking like they belonged in the same world. To fix this I ended up redrawing Lady making her a little less skinny before and for Apple I ended up thinning her arms.

I changed Guy’s pose and fixed up his hair. The fact that his eyes are un-even are a little annoying. I think I’ll need to go back and fix them.

Oh I also forgot to draw the freckles on Apple. I’ll need to add those.

We need to hand in a draft at the end of this week which I’m doing my best to get done, however I decided that it would be more fun doing some art work. 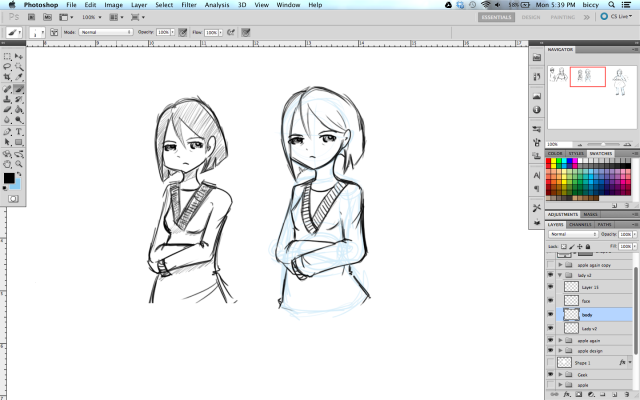 Redrew Lady, she was too skinny next to all the other characters. It’s not much of an improvement but at lest she’s not skin and bones.

Next up thinning Apple’s arms a little.

So, instead of working on Code name Escape I started sketching out another game idea I’d like to make. It’s kinda like megaman but with magical girls.

Here is a sketch of our hero. A magical girl who has no magic. She kinda looks like a ninja. I blame that scarf. I might need to add more bows to make her look more magical. I could take the scarf away but I love scarves on protagonist X3

She kinda looks like a cross between Koga and Janine from pokemon. Oops. It’s the purple and red ninja scarf. But I really did think a royal purple would be a nice change from like pink. Also Sailor Saturn is my favourite sailor scout and she wears purple.  I think she needs a butt bow. All magical girls need butt bows. 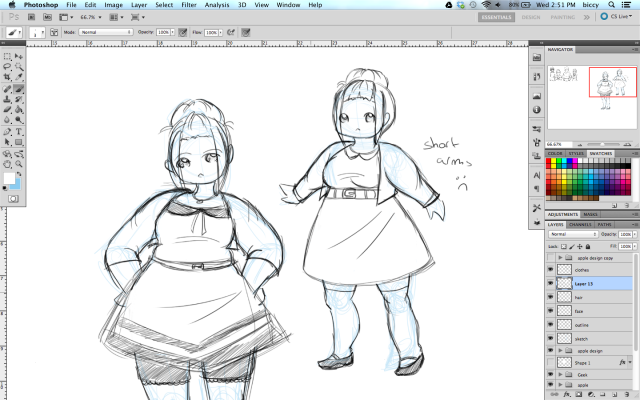 Today I did some sketches of Apple. I wasn’t too happy with what I had before. She didn’t seem large enough. I think I’m quit happy with the drawing on the left and I might use it in game. Or maybe She needs to be drawn larger.

Drawing Apple has been a pain since I’m not use to drawing larger people. I want Apple to look large and believable large.  But I also wanted her to look nice. Finding clothing ideas for her was such a pain. I ended up going with a vintage style and cardigan. I feel like it’s important that Apple wouldn’t want to show off her arms.

Apple’s legs are probably the biggest pain. I’m use to drawing long thing legs like in sailor moon but for a chubby person their legs are normally short. Thank god all the game art will not be needed legs.