It’s the middle of Week 6. Next week is the mid semester break. It’s not much of a break for me however.

For the next few days I want to try and get all the dilemmas into “Code name Escape”. During the break I’d like to start art work and add in narrative.

So maybe by week 7 I can start posting screen shots again. 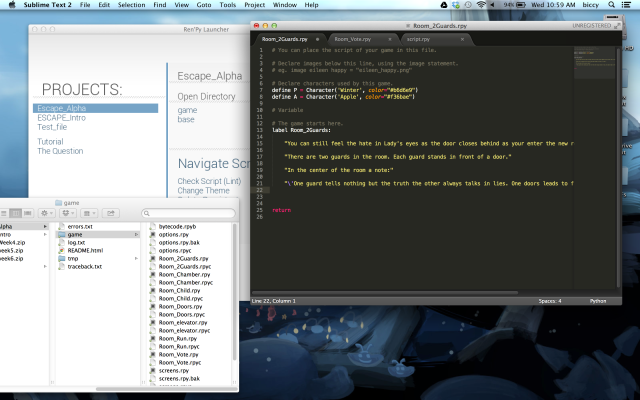 Is really boring to look at.

Oh look, I’ve been working on code. I have like a million ren’py files, la la la. Oh look it’s almost 11am. I should do some work.

Today’s emotions are: I think I have a pimple on my chin, which might explain why I can’t sit my head on my hand like I normally do. So I guess I’m feeling a bit blah?

So yesterday I watched the cube for research. It has a similar plot to what I’m doing where people are trapped and need to escape. It’s a “Canadian science fiction psychological horror film”. It’s not really horror but more ew.

So the plot is there’s a bunch of people who are trapped in a cube with is part of a bigger cube and some cubes have traps inside them and the people want to escape and one guy goes crazy and such.

It’s not a very good movie and for these reasons:

1. You never find out what the cube is and why it exists. The reason the movie tries to sell you is that it originally had a purpose that was lost in the making.

2. You never learn WHY anyone is in the cube.

3. There are no likeable characters. The “leader” and main character later goes crazy and tosses anything likeable out the window and everyone else is too far in the shadow they don’t really have a personality. The characters you get are: a cop, a doctor, a math student, a disabled person and an escape artist.

4. It’s not horror, it was just gross. LIke there was this one time where a guy went into a trapped room and was cut up into little cubes. Gross.

On a final note, while watching the movies I was sure I saw flashes of like someone outside the “cube” watching the group. Which I though would lead to something but never did.

I was told that the second movie had more inside information about the cube itself but after reading the wiki page, nope.

So I’ve been playing virtue’s last reward as research (and fun) while I’m enjoying the game I’m also a little annoyed with it. In order to progress though the game I need to backtrack and pick different choices.

The game branching is pretty amazing. At the start, the game will give me three choices to pick from, my choice turns into two which turns into another three.

To make things simple I’ll give a quick run down of the game. There are 9 people including yourself who are trapped in this locked warehouse building. Everyone is groups into colours and labelled solo or pair. There are these doors which need three players to open, so each pair has to team up with a solo player. You later need to vote to “Ally” or “Betray” the other person, ie. you are in a pair so you need to vote against the solo player you had teamed up with.

So for me my first play I picked to team up with Luna, and then I picked to Ally with her because I’m a nice person and didn’t want to hurt Luna’s feelings. In the second round the solo and pairs had been shuffled. I was originally paired with Phi but now I was paired with Alice.

With each action you take something different will happen.

However the game path you play eventually comes to an end and in order to proceed you “jump” to a past event.

The problem with this jump is that any actions or choices I do no longer effect me. On my second play though I and Phi teamed up with Alice who we later betrayed, I felt bad about it, so I jumped to “change” my vote.

While the game encourages this jumping, I no longer feel a connection for some characters. This has happened with Alice, after I betrayed her I jumped back and picked Ally only for her to betray me, same thing happened with Phi.

But there are characters I still like and I don’t want to betray. Take Luna for example. After Allying with her twice I came to a dead end and jumped back to the start of the game. In order to move forward with the plot I know I need to go down the path that makes me betray Luna. And I really don’t want to do that.

The game is fun, with each play more story is unlocked and I really want to know what is going on. Different choices I make also unlock different puzzles, however there are some story plots that keep repeating themselves and it’s getting a little old.

Anyways, while the game annoys me a little I’m still going to play it. It’s fun and has a good story >.> I just hope I can work everything out before I need to betray Luna.

I’ve been waiting to be a magical girl since I was 10.

btw, Miss Kim pointed out I misspelt my research “diary” as “dairy”. I could change the tag, but it’s more funny this way.

Today the supervisor is away on a business trip. He’ll be back not next week but the week after. Which is the mid semester break. Which really isn’t a break, but kinda like an extra week we are given as honour students to work on stuff.

I though in this blog post I’d talk about honour life for a bit.

This is the kitchen we have. We share it with the PhD students, who apparently steal food so it’s better to hide your food else where. Its a nice kitchen. Has two types of taps, hot n cold drinking filtered water and hot n cold normal tap water. We have a little fridge to keep lunch in and a dish washer that kinda smells. I wonder who is in charge of turning it on. Nobody probably… which is why it smells….

Anyways.  Some times there’s free food placed in the kitchen. Today there was a platter of fruit. I found half a strawberry and I ate two pastry things.

What a good day.

I found a monitor at uni the other week and noticed it wasn’t really plugged into anything. So I bought in a DVI cable and now I can dual screen all the time. It’s very helpful have a second monitor. Like on the dell monitor I can have files and such and my main work on the mac. And by files I mean youtube. I love youtube.

There’s another “spare” screen in the other room. I wonder if my plum can support Three…TRI-SCREENS!

Also why is everything like VGA? VGA is stupid, DVI and HDMI all the day. Or mini HDMI… mini HDMI is good too.

Lately I haven’t been updating about what I’ve been doing. But that’s ok. Coz I have not been doing much :| I should change the blog title to like “Rambles with photos by a crazy person” 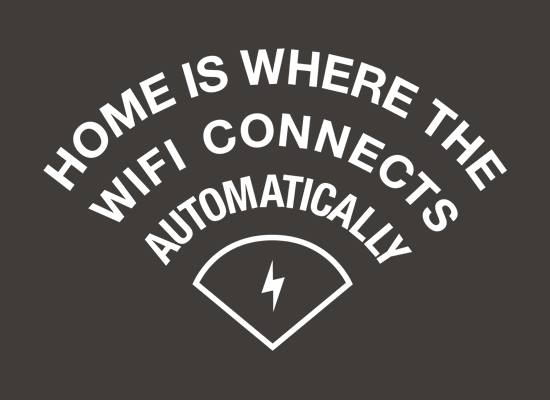 If that’s the case RMIT is home… 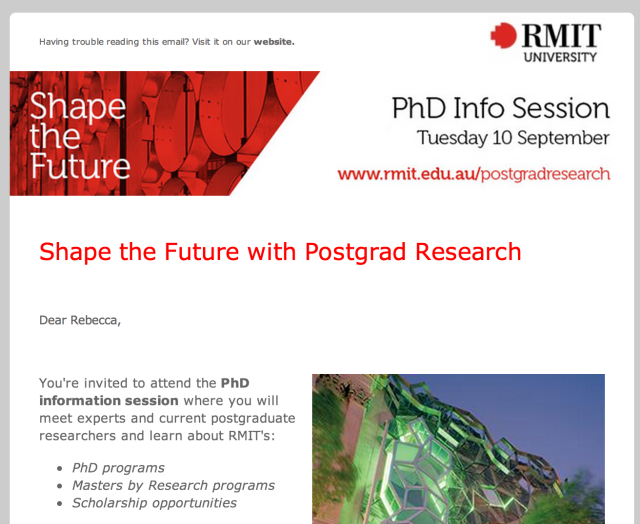 Things I have done today;

Made a bad cup of tea

…Yup. I don’t think I work well when I’m at home. Also it’s really cold in my apartment.

So I arrived at uni today around 10am and around 10:20am I settled down and began to do some work. Because I keep putting it off I forced myself to do some writing. My goal was to get somewhere between 1800-2000 words.

To be fair to myself I did do some reading today between writing. I also had an hour for lunch annnd… spent some time doing nothing >.>

Anyways I need to read up about Interactive Storytelling/Video Game Narratives before I keep writing.

I did not get a chance to work on escape today :(

Today’s stress level is the colour of loneliness for I am the last one at uni today alert.