I think my 3d modeling skills have improved over the year, I skill kind-a suck at un-wrapping UVs and applying textures, but I’m slowly getting there. (There’s still some textures I need to do)

I’m really likening my island, few more things to model but it’s looking good. Now, I need to try and make myself a timetable to try and get this done in time.Time to work on some other assignments 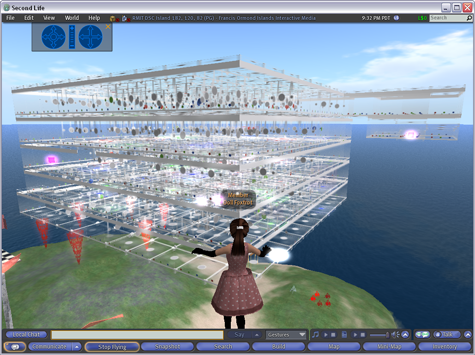 Yay the maze is done! Four weeks of second Life is over and done! So that ends one subject for the semester, just three subjects and an odd number of assignments left.
Now on to work to the next assignment and then maybe I’ll get some sleep.

And I just poked myself in the eye.

Well… this is taking much longer then what I had though :\ The maze is pretty much done… but we have to add the moving script and then I’ll need to add the teleport.. I don’t think I’ll have time to fine turn it… Although the thing is due tomorrow at 3… But I still have some documents to write up.I don’t think I’m going to get any sleep untill I get all this done and the navigation in SL is so bloody hard X_x

I have dual monitors! =D Yay

Still working with Second Life, it’s due Monday. My group, despite the fact that we have a programmer decided that I would do the scripting. After putting it off for a while thinking it was too much of a pain it’s really not that hard. I wrote my first linden script(s) today. I actually used smultron to write ‘em up, I was at Uni and couldn’t connect to SL via the laptop. I could have used a normal text editor but I like how the text will change colour.

So basically my code is that when the green or pink cube is touched with an avatar the purple cube will go up 1m or down 1m if it’s already up. Yup… exciting. Tomorrow I need to go and work out how to create a teleport. Which might be kind-a fun.

Look what I’ve been doing:

Had a look at a few tutorials, took me around four hours, I think next time it won’t take me as long and hopefully I’ll get better. Did have some fun doing this it reminded me of the times when oekaki was really popular for me.

Final image is same as 5 but with the black outline changed to colour outline. I’m still a little confused if this is actually pixel art for not *shrugs* I think I need to improve on the hair. I guess I’ll try again tomorrow

Oh god, why didn’t I think of this sooner; 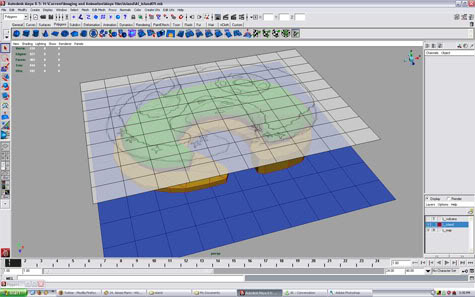 I re-started my major assignment for Imaging and Animation, I didn’t like where the last one was going so I scrapped it. This time around I added the original sketch of my island design which is making things some what easier. Four-ish hours later I’m just a little bit a head of where the previous island was at.

Today was been a pretty good day, while procrastinating I found a unused sketch book (score!) and I found my design sketches for Kite story (as well as a few sketches for the game idea before Kite Story). I’m some what tempted to get myself another display book and make a folio, just simply because I like making folios and as a plus side I can use it in interviews, I also just like the idea of havening something to flip though.

Anyways… Like so many others after the manifest weekend I’ve caught the manifest flu, so I’m going to go take a rest and head back to procrastinating.